Is it wrongful death? 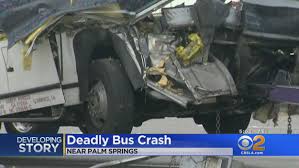 In the aftermath of a tragic situation, victims, or surviving family members of the deceased, are left with many questions, including, “Who do I hold responsible for this?”

For the 31 injured, and for the family members of the 13 killed in the devastating crash near Palm Springs, that is exactly the question that many are asking. In the weeks to come, many of these affected individuals will question whether they should seek legal representation for their personal injuries, or for the wrongful death of a loved-one.

The accident occurred in the early morning hours on Sunday, October 23, on I-10 near Palm Springs. That means that California courts, and specifically the Superior Court in Riverside County, would have jurisdiction over a claim brought by an individual related to this accident. The big question is, though: who is responsible for the injuries and deaths arising from this incident? The incident is fresh, authorities have not yet completed their investigation, and so not all of the facts are available at this time. Notwithstanding, California law provides many remedies for those affected by this collision.

A qualified individual, as the surviving representative of a decedent whose death was the result of another’s wrongful conduct, may seek to hold the wrongdoer responsible for the harm (“damages”) caused. In California, the surviving representative may also sue for certain damages of his or her own. Who may represent the decedent’s claim is set by statute, and the type of damages that may be recovered are fairly broad. For more information, see a previous article, “Trading Grief for Justice,” which explores the topic of wrongful death in more detail.

At this time, it is unknown who or what caused the collision. However, USA Holiday, the bus company that was transporting passengers, owed a duty of care to each passenger on the bus to operate the bus with a reasonable amount of care such that no one on board would sustain injury. Because 31 people sustained injury, and 13 were killed, the bus company likely breached its duty to its passengers and would be responsible for damages. Under the theory of negligence, an injured person may recover the cost of medical expenses, the cost of any future care, lost income from the inability to work due to injuries, as well as for pain and suffering, physical limitations, grief, anxiety, inconvenience, and a host of other “non-economic” damages subject to proof.

On the other side of the coin, the driver of the truck owed a duty of care to operate his truck with a reasonable amount of care in order to avoid causing injury to other drivers on the road, including the passengers on the bus. If the investigation reveals that the truck driver acted improperly, then he may be at fault for this collision, and totally or partially responsible for the damages associated with the passengers’ injuries or death.

Every company in California has a duty to reasonably avoid hiring or keeping employees who it knows, or it should know, pose a risk to a particular class of people, or to the public in general. If USA Holiday allowed the driver to get behind the wheel knowing that he was unfit to safely transport passengers, the company could be held directly liable for the harms discussed so far in this article.

In each case, the bus company and the truck driver likely have insurance policies to cover incidents such as this. However, because there are so many individuals involved, the amount of claims could be numerous. An insurance company is only obligated to pay up to the policyholder’s limits, and nothing more. This means that where there are many people injured, and each is seeking to recover from the same pie, each person will receive a smaller portion of that pie. Unfortunately, that portion may not cover all of the harms suffered. In such cases, especially, it is important for an injured person to have an attorney advocate on his or her behalf to ensure that a fair result is achieved.

Talk With an Attorney

The claims discussed in this article involve complicated legal and procedural matters, which no injured person should have to attempt on their own. If you have been injured, and you think you have a claim, you should contact a qualified personal injury attorney in your area. Many personal injury attorneys offer free consultations, and would be happy to discuss the particular details of your claim.