It’s Silent, It’s (Mostly) Invisible, and It Dramatically Alters Nearly Every Aspect of Your Health and Well-Being…

In the last several decades, human understanding and treatment of the brain, physiologically, as well as emotionally, behaviorally, and cognitively, has dramatically changed for the better. It was not so long ago that state institutions performed electroshock therapy and cold showers as “treatment” for poorly understood disorders of the mind. But, there is still progress that can be made.

There is a strong connection between the brain and the body (what an obvious statement). Yet, many still fail to realize that even mild trauma to the brain can have serious, lasting consequences on both an individual’s mental and physical health. Science has demonstrated that even the “fender-bender” can cause brain damage; however, brain damage resulting from “mild” trauma often goes unnoticed, untreated and unresolved.

A “single photon emission computed topography” scan, commonly referred to as SPECT, is an existing but underutilized tool, which has opened the door for better and wider treatment of disorders of the brain, including those resulting from “mild” trauma. These scans return actual images of the brain, and allow a trained eye to identify and monitor activity levels in particular regions of the brain, as well as identify physical deformities, all of which often result from trauma. This is important because each area of the brain is associated with a different function, including organ function, mood, reasoning, stress tolerance, drug and alcohol use, etc. Here is what a SPECT scan looks like: 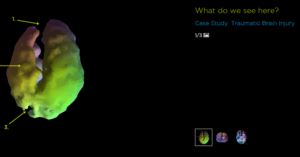 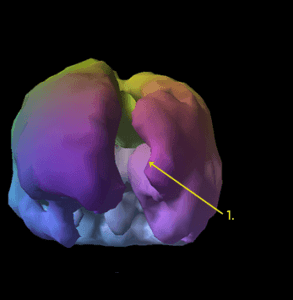 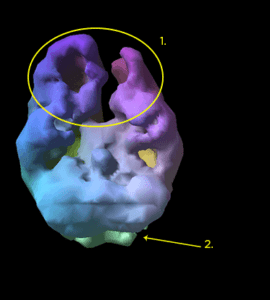 Dr. Daniel G. Amen, a well-known American psychiatrist who specializes in treatment of brain disorders, and whose clinics have performed over 55,000 SPECT scans[2], wrote the following:

If you think brain injury means only serious injuries like flying through the windshield of a car or falling off the roof onto your head, you are wrong. It doesn’t have to be a “serious” injury to have serious consequences for your body and your health. After viewing more than 55,000 brain scans, it has become very clear to me that what many people think of as mild trauma can have a significantly negative effect on people’s brains and can significantly change their lives and their ability to look and feel their best. Many times, these injuries go unnoticed, in part because mental health professionals never look at brain function. Studies show that people who have suffered brain injuries, even mild ones, often experience emotional, behavioral, or cognitive problems.[3]

This science is directly applicable to those who have suffered personal injuries due to the fault of another. Injured persons often report symptoms of a “mild” traumatic brain injury, which include:[4]

The problem is: these symptoms, except in the most visibly horrendous injuries, are rarely thought to be associated with a traumatic brain injury. However, this stems simply from an unawareness of the science behind brain injuries. Insurance companies, lawyers, judges, jurors, and to some extent even doctors, fail to understand the linkage between the body and the brain. The result: many people who are injured due to the fault of another experience behavioral and cognitive changes which drastically impact their lives, but they are never compensated for that harm because they are never properly diagnosed and treated. This is, by definition, injustice!

In reality, even what is scientifically termed a “mild traumatic brain injury” can have dire effects on a person’s well-being, which can affect relationships, productivity, and general enjoyment of life. The law is constantly changing to adapt to shifting societal views and evolving science. Notwithstanding, it may be some time before SPECT scans, and other similar scientific principles, are regularly utilized in courtrooms as the powerful tools that they are.

If you have been injured due to the fault of another, pay attention to your brain! Consider your behavior, your cognition, and your body before you were injured, and consider each after. Often times, family members, a spouse and close friends will notice a change in your mood, or other behavioral changes. These close relationships can be critical in identifying a traumatic brain injury, and in getting the proper treatment. If your mechanism of injury created the risk of trauma to your brain, and if you feel the symptoms discussed in this article, you may have suffered a traumatic brain injury for which you should be compensated for.